We wanted to get a really early start so we woke up around 4:00am only to find out that there was a huge thunderstorm coming through.  So we leisurely ate breakfast at the hotel and then tried to leave.  We saw a huge flash of lightening after getting all the way down the driveway and turned around back to the hotel.

After the storm seemed to pass, we tried again to get going.  This time we were successful and soon had to take off our rain gear.

We reached Girard and took a break at a gas station to “refuel.”  As we left town we saw another great stop, but it was closed. 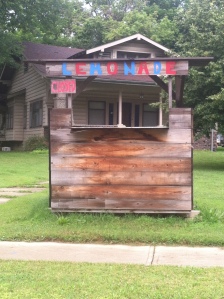 Our next stop was a church that welcomes cyclists to stay or just cool off in their air conditioning.  We did go in, use the bathroom and we signed their log book.  We then left and continued to battle the Kansas wind.

We thought this was a funny mailbox… 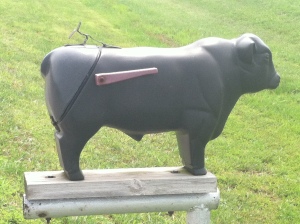 Our last 18 miles we turned North and had a glorious tailwind and we were in Chanute in no time.  We had now decided that camping in the city parks was not bringing us good sleep, so we opted for the Knight’s Inn.  Turned out they give cyclists a discount.  They had an amazing wooden map of the United States, with wood from all over the world.

We unloaded our bikes and then went to get something to eat.  Linda just wanted to go to Walmart for something healthy and Phil was craving McDonald’s.  We ended up going to McDonald’s first and then stopped at Walmart for a few groceries.

On our way back, we spotted Melinda and Lisa arriving on their bikes and heading for the city park.  We caught up with them and once we told them where we were staying and for the price, they quickly decided to do the same.   We all did laundry and headed to bed.