We woke up early after staying up pretty late with the other riders.  Phil had a good audience to laugh at his puns as they were enjoying being outside of the dry counties of Kentucky.

5am came too early and we probably should have stayed in bed.  We were both really cranky most of the morning and took it out on one another for about half the morning.

We went to cross the bridge into Missouri when Phil realized he had left his phone back at the hostel.  As we headed back up the hill into Chester again, we ran into our friends from last night so we pulled over to see if they might have picked up Phil’s phone.  They had not, but a pick up truck saw us stopped and pulled over to see if we were alright.  Phil asked if he could get a ride back up to the hostel and the driver agreed.  Linda stayed with the bikes.

When Phil returned he let Linda know a police escort was on their way to take us across the bridge.  The driver had told Phil it was the safest way to go.  We pulled over to the welcome center and waited.  Very quickly the officer arrived and he followed us with his lights on across the bridge. 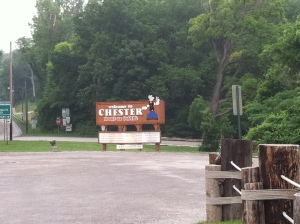 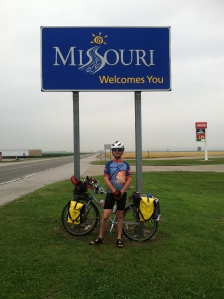 After a little  flat terrain, Missouri showed us what she was really made of.  The hills became relentless and we still were having a stray coal truck and tractor trailer barreling down the road. We stopped at a convenience store out of St. Mary’s, MO and then continued on.

It became evident that Phil was too tired to even be riding.  We ended up stopping at a shady spot to rest and eat some lunch.

After resting up we continued down the hills, knowing from the maps they would become a little gentler. It was still a struggle and Phil began wondering if we’d make it to our planned destination of Farmington, MO with him being so fatigued before the day even started.

We then saw a sign for Crown Ridge, which said it had a restaurant, tours and Lodging only 1.3 miles away!  There had been nothing on the maps about lodging, so we decided to check it out.  It turns out that Crown Ridge is a Tiger Sanctuary and the tours were of the Tigers.  Linda became very excited over this.  We had to call the number to see if they had lodging available for the night and they did right on site with the Tigers (they also had lodging at their winery, 9 miles down the road).  We took a room, a little more pricey then we wanted to pay, but worth it for the night.  And we got too see tigers! 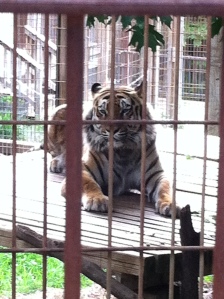