We left the hotel and after we left Chanute there was nothing.  We passed the first town, Benedict that was about 1 mile off route.  We then continued on to Toronto, hoping there would be a place to get “real” food.  We turned north again and the southern winds helped us quite a bit.  We were able to get up to 16-19 mph without hardly trying.

We arrived at Toronto and it was practically a ghost town.  We came across a G lodge where there were some ladies making quilts.  They let us know there was a good place to eat just a few miles north on our route.  We quickly got back on our bikes and arrived at Lizard Lips Grill and Deli.  We got some great food there and rested for a while. 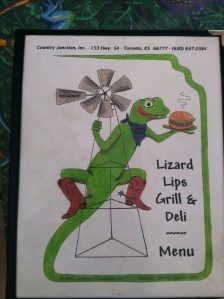 We then continued onto Route 54, where we found out the annual Race Across America was going on.  The RAAM is an annual supported race where a car follows behind the racers.  We had a lot of fun cheering on the racers going the other way on Route 54.

Route 54 was a pretty busy road with a good shoulder, but the large truck traffic made the 30 mph cross winds more interesting.  The trucks going both directions had their own wind going their direction.  Linda was proud of herself for keeping the rubber side down and not falling over. 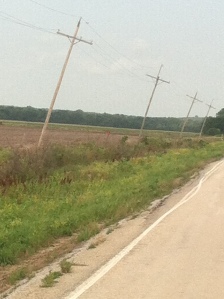 We quickly figured out where the wind normally comes from

After a long day of fighting the cross winds, we finally reached Eureka and we checked into the Blue Stem Lodge.  It was a great price and the pool felt great!  We ate right across the street at an American/Chinese Buffet and our clothes easily dried when we hung them out to dry after washing them in the sink due to the continued wind 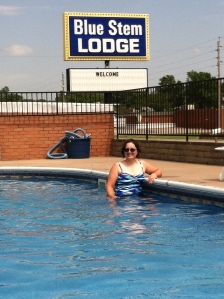