Saturday was a long day.  Phil and I did not get to sleep till a little later than we would have liked.  We slept in the “Grace Chapel” with the Apostles watching over us. 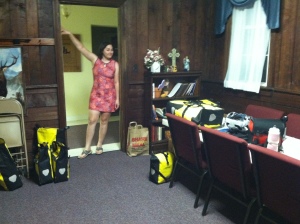 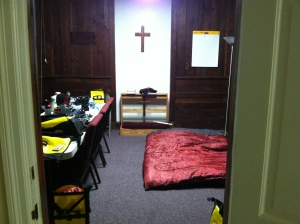 When we woke up in the morning we had breakfast and packed up.  The other group left before us.  We were all by ourselves and just as we were about to leave, the Reverend arrived.  We were able to thank Reverend Mark in person and get a group photo before we left using our tripod.  We would have stayed for service, but it didn’t start till 11:00am. 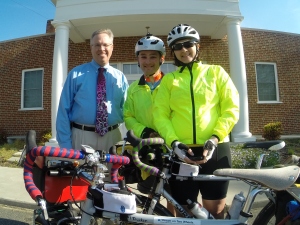 We headed on down the road to traverse more hilly terrain and windy, narrow roads that were somewhat busy at times.  For the most part, people were courteous and gave us space.  Our plan was to stop in Mechanicsville for lunch.   Soon after leaving the Church, we stopped at a convenience store just outside of Glendale for some Gatorade and snacks.  As we entered the edge of Mechanicsville, we came upon a huge shopping center and immediately saw a Buffalo Wild Wings.

We stopped there for lunch and sat outside at a table with an umbrella to cool off.  Two young ladies and a child were seated outside soon after us.  The little girl kept looking at our bikes and asking her mom questions about them.  Phil was at it it yet again, walking up to the women and starting a conversation.  Phil told them what we were doing and they were very interested in our trip details.  We talked about the many details of our trip.  Our new friends, Angela, her daughter Ayla, and Dana, were very enthusiastic about our trip.  .

We also mentioned that we had stayed at a Church the night before but could not make the late service.  Phil being Phil asked them what they were doing for the rest of the afternoon and they mentioned that their church had a Sunday evening service at 6:30pm and that they were going to that.  We needed to make it to our hotel in Ashland where we would stay for the night.  They offered to pick us up and take us to their service!  Angela gave Linda her cell number and we planned to have Angela pick us up at 6pm!

We quickly got on our bikes after lunch and started off for Ashland.  We were very tired so our pace was very slow, however, the terrain was mostly flat between Mechanicsville and Ashland.  We checked into our hotel around 4:30 and gave Angela a call.  Then, we had just enough time to wash our clothes at the guest laundry room, shower, and get changed before Angela arrived to take us to the service.  However, we had put the clothes in the washer before noticing that the coin slot for the dryer was jammed (wink, wink).  The hotel dried our clothes for us in their commercial machine.  Wow, that was fast!

At the same time we were in a rush to get ready, our friends Dan and Janet whom had biked with us for the first half of Saturday, texted us to say that they were right outside our hotel!

After parting ways on Saturday, Dan and Janet biked back to Williamsburg to sight-see and then stayed overnight.  Their return trip home to PA brought them within a mile of our hotel.  They used the “Find My Friends” app to “stalk us” right where we were!  They stopped in quickly for one last hug, which was awesome!

Dan and Janet left and we quickly finished getting ready.  Then Angela arrived and we were off to meet some great folks at Liberty Christian Church in Mechanicsville.  We met so many nice folks at Liberty Christian and enjoyed the service.  One of the many super nice folks we met, Nate, offered to help us network with his friends and family for places to stay along the rest of our trip.  We have offers coming in all along our route!

After a really awesome service, we had dinner with Angela, Ayla and Dana at Applebee’s right near our hotel in Ashland before they left to go home.