We slept in Tuesday morning and then ate the free breakfast at the hotel.  We left around 10am and it was already hot and humid.  We later regretted leaving due to the heat, but we both wanted to get some miles in.

Our ride between Max Meadows and Wytheville was very scenic and mostly uphill. 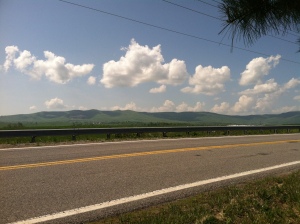 Just before coming into Wytheville we crossed over I-81 and I-77. 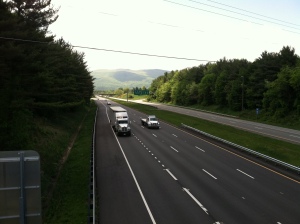 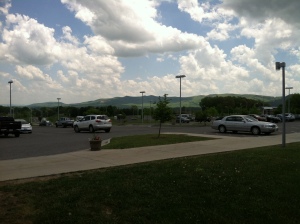 On our way to the park, we came across Mike, also riding across the country.  He was headed to the Comfort Suites.  Phil felt that was a good idea, so we turned around and went there as well.  We were very hot and tired and wanted a shower which the park accommodations did not have and we needed some quality rest.

After we had all checked in and got settled,  Phil emailed Mike to see if he wanted to go to dinner somewhere.  Phil then started calling around for massage therapists in the area.  No one seemed to have an opening.

We rested up a bit before heading out for dinner.  Just as we were about to head out, Mike called and suggested that we go to the historic “Log House” as he had read about it on other blogs.

We ordered drinks first and Mike kicked back with some of his favorite beer and Linda had a glass of organic Merlot.

The food was delicious.