We woke up excited knowing that we would finally be entering a new state and be putting Virginia behind us.  We packed up our stuff and ate breakfast in the hotel room.

The most miles we have ridden in a day so far was 60 on the first day and the terrain was mostly flat.  And now we were attempting a 68 mile day with very mountainous terrain!

After the second very long and steep climb of the day Phil was feeling very fatigued.  We stopped to rest at a gas station just prior to the third mountain climb.  We started a conversation with a man named Pat.  Phil had mentioned how fatigued he was feeling and Pat offered to drive us over the mountain in his SUV.  So we loaded the bikes in his vehicle and got a ride.

So after getting a ride over the 3rd major climb, we attempted the 4th mountain and made it half way before Phil was exhausted and had to stop.  Phil rolled out the tarp on the side of the road to lay on and rest.  He rested for a while and then one of the ACA cyclists came up on us and offered Phil an energy gel pack to help him along the way.

Slowly we made it up the final mountain, however we still had 20 miles to go to Hindman where everyone else was camping for the night.  Phil went as far as he could and then pulled over and said he could not go any further.

Linda was very tired too but wanted to press forward anyway.  Linda was not very patient or sympathetic.  She realized Phil wasn’t biking any further.  The owners of the lawn Phil was sitting on were outside sitting on their porch.  We saw a pickup truck at the top of the driveway so Linda walked up to them and asked for a ride offering a fee.  He saw how tired Phil looked and agreed to take us to Hindman in his small pick-up truck.

Phil rode in the back with the tailgate down clinging on for dear life!  Linda sat in the passenger seat of the small cab with our new friend John.  He seemed quiet and reserved but held good conversation the entire way.  John asked Linda the basic questions: “Where are ya’ll from?  Where ya going?  How long have you been on the road?” and commented on the number of cyclists he’s seen going by his house all summer long.  It was comforting when he told Linda that most of the locals and coal truck drivers that travel the route know to watch for cyclists and tend to be very careful.  We had not been in Kentucky for long, but that had so far seemed to be the case.  He also spoke of the numerous amount of Elk that live in the area which took Linda by surprise.

John dropped us off at the Historical Society in Hindman.  We were glad we did not have to bike up the driveway which happened to be the steepest climb of the day!  According to the Bike Hostel host, David, only a handful of cyclists make it all the way up the hill without walking.

When we arrived, John and the other cyclists we had met Friday were already there.  We set up our tent and then got to experience David’s hospitality with a nice glass of sweet tea and ice water.  We got in line for showers and ordered food for delivery.  Before bed, David came out with delicious banana splits that were delicious! 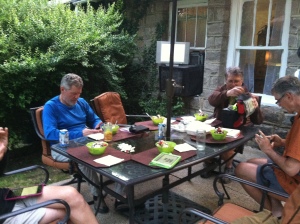 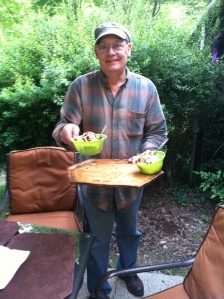