After our record mileage day on Friday, we gave ourselves a break and slept in.  After everyone was awake we took a group photo in the morning. 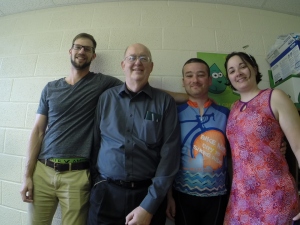 Before we got on our way, Pastor Wayne treated us all to breakfast at another Church a few blocks away that was having a fundraiser for Cancer. 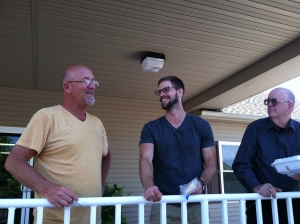 We got on the road around 11:00am, which was the latest we’ve ever gotten started.  It was already hot and we were still a little fatigued from the previous day.  We joked around about only getting across the Ohio river and quitting for the day.  Our travels today took us through scenic Amish country.

We then crossed the Ohio River on the Ferry and entered the third state of the trip: Illinois! 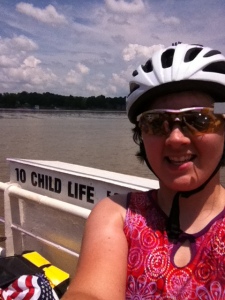 Once on the Illinois side we stopped to check out a vender in the parking lot.  Phil bought a bandanna to help with sweat and we both bought a cold beverage.  We then headed a block up the street to a cafe to cool off.  Linda got some ice cream and ate her sandwich.

Alex caught up with us and met us at the cafe.  He let us know a couple of touring cyclists were waiting for the next ferry on the Kentucky side.  When they came across we recognized them as the girls we had met at Little Dave’s just a few days before.  They were staying the night here at Cave-In-Rock.  They told us we’d be welcome to camp with them if we chose to stay in town that night.

Alex was going to go on, so we wished each other well and we decided to camp at Cave in Rock due to the heat.

We attracted a lot of attention with our bikes as we always seem to do.  We met some folks outside the Cafe. 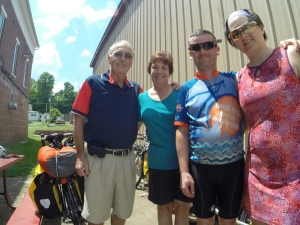 We met up with the girls up at the campground.  They had already set up their tent and we were able to share a site with them.  It was only $10 per site for bicyclists, so we only paid $5 to camp.

As we were getting ready to go to sleep, another touring cyclists showed up and he stayed at the site as well.  Philipp is from Germany. We chatted for a bit and then went to bed.