Phil and Linda packed up early in the morning and left Hayes Canyon Campground while Philipp slept in.

We passed by this cool mailbox!  These people must get a lot of airmail!!!!! 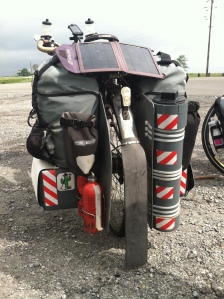 Philipp caught up with us about ten or fifteen miles from Carbondale.  The three of us then deviated slightly off the TransAm route to go direct to our hotel in Carbondale.  On the way, we missed a turn that was unmarked.  About a half mile down the road we realized we missed our turn and so we turned around.  This nice man passed us on the road but pulled over ahead of us to talk with us.  He was aware of the bike race across America and was interested in our trip as well.  He also told us where the road was that we missed and how to get to the hotel.

Sorry, forgot your name!  A result of being two weeks behind on blogging 😦

The three of us arrived at the Comfort Inn, checked in and then got showers.  After, Phil and Linda walked across the street to Boondocks Seafood Co. Bar & Grill for dinner while Philipp stayed in the room and ate what he had with him.

Later that evening a thug was talking very loud on his cell phone in the hallway.  Phil got out of bed, opened our door, and saw the man walk into the pool room and then also saw the night clerk at the other end of the hall and yelled to him: Yo!!!! while pointing to the pool room where the loud thug was.  The clerk went to the pool room and addressed the issue.

Later that night and into the early hours of the morning, noise in the hall continued to be a problem.  We were at the end of the building opposite the front desk and near the pool, stairs, and an exit/entrance.  People kept coming and going and doors were loud every time they were opened and shut.  Phil called the front desk and threatened to call the police.

We all woke up and had the complimentary breakfast.  Then Phil and Linda went to the front desk to discuss the noise problem.  We got our money back and did not pay for our stay plus our checkout time was extended until 2pm.

Philipp packed up and left while we stayed until close to 2pm to rest more.  We checked out around 2pm and then biked a couple miles to Walmart before checking in at another hotel for the night since we did not get good sleep the night before.

We checked in at the Best Western and then walked across the parking lot to Moe’s Southwest Grill for dinner while a room was being cleaned for us.  We received 20% off with our key cards because the owner of the hotel also owns the restaurant.  After we ate we went back to our room only to find that it smelled like smoke.  The front desk clerk said that the person who had been in the room prior had lost their home to a fire and that may have been why the room smelled like smoke.   Either way, she said that we would receive a discount.

Back when we were at the bike shop in Owensboro Kentucky, the tech had discovered a slight bulge on Phil’s rear tire.  They did not have the tire we needed so we ordered one through a bike shop in Carbondale Illinois.

By the time we checked in, it was too late to get to the bike shop and Phil was still exhausted from the night before.  We would have to go tomorrow which would mean a late start or another rest day.  We decided to take one more rest day.

Soon after checking in, Linda walked to the Kroger in the same complex to get some groceries.  On the way to Kroger Linda noticed a store called The Great Outdoors and checked it out first.

We had Specialized jackets that we thought were waterproof but they had not kept us dry.  Linda saw Columbia brand waterproof rain jackets for sale and called Phil to have him come check them out.  Phil walked over and we decided we liked them.  We then walked to the next store over called Cool Spoons and got some frozen yogurt.

The bike shop did not open until 10am.  We arrived as soon as they opened since it was supposed to rain later in the day.  We got there and the owner was able to get Schwalbe to warranty the tire since it seemed to be defective.  After getting the tire replaced, we then went to the Natural/Organic Market down the street and had some lunch before heading back to the hotel.

After we arrived back at the hotel, Linda went to Kohl’s to get another bathing suit.  While Linda was at Kohl’s, the front desk clerk gave Phil two vouchers for free chips and salsa at Moe’s Southwest Grill.  Phil headed over and Linda met him there.

We then worked on the blog and watched the rain come down.  There were a few tornado watches in effect around our area, but no warnings.  We were happy to be at a hotel and not tenting and we slept well too.