We got a free ride into Eminence for breakfast from the people who own the cabins.  We met back up with Lisa and Melinda at the diner and then got going.  This young person passed us a few times on his four wheeler. 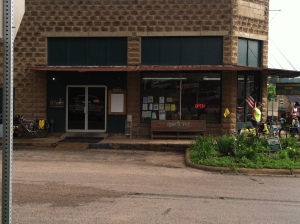 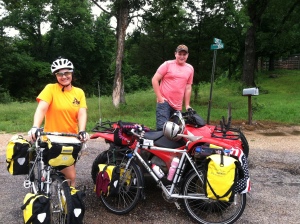 The weather was cool and the terrain was not horrible.  We knew the weather was calling for scattered thunderstorms that day.  We started to see the sky start to darken to one side and we thought we might miss it.  The wind then starting picking up and we heard and saw the rain coming down the road.  We threw on our rain coats and took cover under someone’s car port next to their house.  Phil attempted to knock on the door, but no answer.

After a few minutes, it was continuing to storm with thunder and lightening, a young woman came to the side door and saw if we were okay.  She disappeared for a few more minutes and then came back again to make sure we were okay.  Phil asked if we could step in until the weather cleared and she agreed.  She said she lived there with her grandmother.

After a few minutes her grandmother came into the room we were in and told us to please sit down and make ourselves at home.  We waiting at least 20 minutes for the storm to pass.  When the worst was over we got back on the road and it soon stopped raining altogether.

We met this guy biking east and he is from Canada.  He said his flag makes cars give him more room when passing. 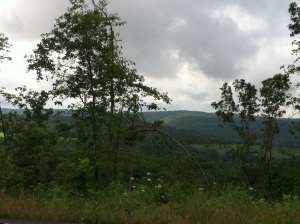 Some scenery from the day.

We got into Houston and met some construction workers outside of KFC/Taco bell.  They were trying to clean up some sewage spill and it smelled pretty bad.  We met Lloyd and got directions from him to the city park we were to camp in and he also recommended to us the Lazy L Motel.

We were not sure what we wanted to do, so we stopped and ate at KFC/Taco Bell first.  As we were eating, we saw a touring cyclist going by.  Phil flagged him down and turns out he was looking to camp in the city park as well and he had person behind him.  We firmed up our directions with other locals while the other touring cyclists got into town.

We arrived at the park and found out that cyclists swim free at the pool there. Unfortunately the hot water heater was down so we had cold showers. 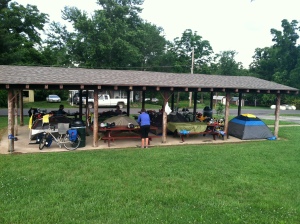 After everyone had settled in we had a brief thunderstorm pass through so we were happy to be under the pavilion.
As we started to get ready to turn in for the night a few teenagers turned on the lights to play volleyball and proceeded to make a lot of noise until 10:30-11:00 at night.

Phil was too tired from being up late to go on. We ended up deciding to take a rest day. We did our laundry and ate breakfast right across the street at “The Eatin Place.”  Phil got his hair cut and we decided not to return to the city park in favor of getting quality sleep. We checked in at the Lazy L which had been recommended to us the day before. There we got better rest. 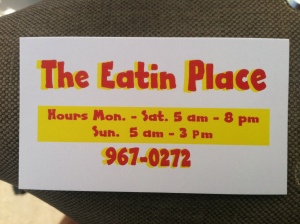