We left the hotel not sure how far we wanted to go that day.  We ran into some riders going eastbound. 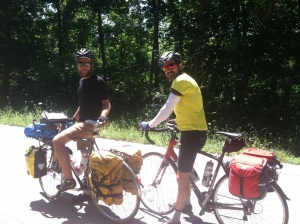 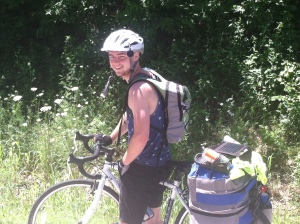 We found Jonathan again and he told us he wanted to end up in Golden City, MO tonight and Mike had left very early to get to Kansas.  This encouraged Phil to try to get to Golden City as well, which would be an 84 mile day.  That would make it our longest mileage day yet.  Linda was unsure about it, but agreed to try for it.

We passed by some interesting places and even found some people on horseback.

We took a rest at Ash Grove, MO and found a scale that could weigh our bikes.  We got help and lifted our bikes onto the hanging scale.  Phil’s bike weighed 84 lbs and Linda’s bike weighed 97 lbs (this included extra food we had packed with us).  We decided it might be time to send more stuff home.  We met some awesome people in Ash Grove before we went on our way. 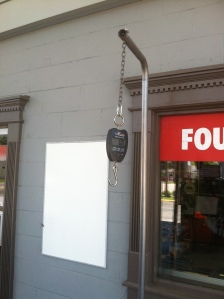 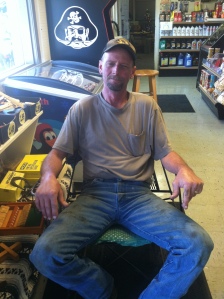 We finally made it to Golden City, MO. We found the city park where we could camp and found a baseball game going on there.  There was a shower and bathrooms there, but there was also a lot of people there.  We wanted to just relax.  Phil started talking to some strangers and one invited us into their home to take a shower.  Their backyard bordered the park, so it was easy for us to get to.  We got to take a nice hot shower in private and then got to meet April and Scott.  They had us sign their log book of cyclists they had started just that year.  We had great conversation, ate some of the food we had and watched a episode of “Undercover boss.”  April even did our laundry for us. 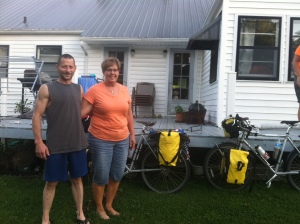 As the last people left with their screaming children we were relieved that we would finally get some sleep.  Then someone in a truck with no muffler started driving around and in the park.  They did a couple of doughnuts in the gravel parking lot, raced down the alleyway and then drove through someone’s yard.  They finally left between 11:30pm and midnight.