We left Larned and there was quite a cross wind.  It would be another 60+ mile day, but there was a town half way in between so we knew we’d have a break.  A few miles out of town was Fort Larned National Historic Site.  We took a picture, but it didn’t look like there was much more there except picnic tables.

After 14 miles we finally turned north and enjoyed a 19 mile tailwind to Rush Center.  In Rush Center there was a single restaurant that we would have missed if we hadn’t seen another touring bike alongside the building.  We spoke with the other cyclist who was headed east and compared notes of what was ahead.  We grabbed some lunch at the bar and Phil entertained the waitresses with his jokes.

As we continued down the road of endless wheat fields we came to a curve in the road and found this:

We passed by Alexander, KS where you could camp at the rest stop.  Apparently the rest stop is always open with bathrooms.  This also marked the end of map 8 and the beginning of map 7.

We reached Ness City, KS in the afternoon and the first thing we found was an ice cream stop.  We considered where to sleep and the Derrick Motel and Inn right next door to the ice cream shop was getting tempting.  The ladies at the ice cream shop had nothing bad to say about it.  Linda went to see how much a room was and check the place out.  To her surprise it was a very unique place with a hot tub, pool and laundry for a very good price.  We took the room and got our showers.

Phil was curious where the other racers were and we found out 4 racers were near Ness City from the Trans Am race tracker website.  We waited at the ice cream shop until it was almost dark and met some fabulous locals.

After the ice cream shop closed, we figured out the only place open was the convenience store a few blocks down.  Linda started walking down while Phil decided to get his bike.  We were able to meet up with the 4 racers who stopped at the convenience store for food around 10pm.  They ended up deciding to stay in Ness City at the same motel.

We decided to sleep in and did not get going until after 11am.  We started on our way and then realized the sky was getting very dark on one side.  We started to approach a a building that we found out was a business selling trailers.  Linda was planning on checking her phone for the weather when we got to the driveway, but she didn’t have too. A man met us in his golf cart at the entrance to the driveway, inviting us in the building because a storm was coming with heavy rain, lightening, winds and there was a rumored tornado to the north.  We graciously accepted.

We hung around until 2:30 and it was still raining with lightening near by.  One of the employees offered to give us a ride back into town and we accepted.  We loaded up the bikes in his pick-up truck and he took us the 4 miles back into town to the motel.

We checked back into the same room and then went to get something to eat at the Mexican place down the street when the rain died down.  We were very hungry and it tasted very good. 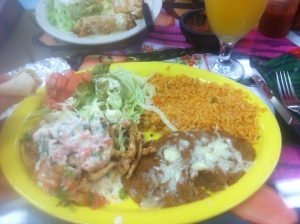 We then went back and relaxed at the hotel.  We met another young man going west soaking in the hot tub.  He was doing 80-100 miles/day and had gotten very sick and dehydrated.  He was taking a rest day in Ness City to get himself feeling better.  He was also planning on doing the Western Express through the desert to San Francisco.  Linda told him to drink lots of water and to be careful.  We wished him well.

We got some rest and went to bed.