Checking out of the motel the smell coming from our neighbors’ room reminded us that pot was legal in Colorado.  We hung around Pueblo for a little while and took some pictures.  We found a fabulous cafe that had gluten free bread, so Linda got a breakfast sandwich there.

We then continued on our way.  As we left Pueblo, Linda again felt like she could see the faint outline of the Rocky Mountains.  This time, Phil agreed.  This was a very exciting part of our trip and the realization we had made it from the East coast to the Rocky mountains felt amazing.  Phil celebrated with cake. 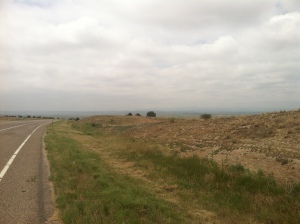 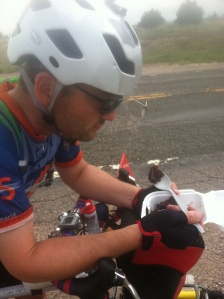 We were definetly on a high seeing the mountains (and not just because of being in Colorado).  They were beautiful and kept getting bigger. 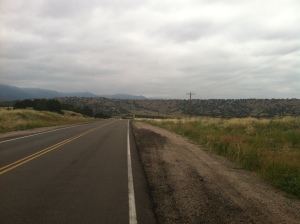 The high started wearing off and Phil began to get extremely tired.  And it being Phil’s Birthday, Linda was not going to push him.  Where we stopped, we suddenly heard a truck coming out of a driveway right behind us.  Phil went right up to the truck and asked the man if he would take us over steep grade that was suddenly before us.  He was more then willing and was actually going in our direction.  He said he would take us as far as Florence and then he was going the opposite direction.  Turned out he was a local pastor and we had a very enjoyable ride with him.   It was another “God Provides” moment for us.

Once we got to Florence we got something to eat at the Carl’s Jr and the gas station.  Phil was starting to get concerned about the weather, but Linda reassured him that the weather app said no rain in Canon City.  We then had a very enjoyable ride to Canon City, going through a couple of towns.  The only downside to our ride was we hit rush hour in those towns so there happened to be a lot of traffic on the roads.   It was very pretty though.

Once in Canon City, we had a hard time deciding on the best place to stay and got mixed reviews from the locals.  We finally questioned the local police officers on duty and they suggested staying at the nicer hotels outside of town.  They “visited” the motels in town on a more frequent basis then the hotels down the road (and by visiting, they did not mean because they were staying there).  Before heading out of town, we stopped at a local sushi place that was amazing.  There was at least an hour wait, so we opted to take it to go.  While we waited for our food we had a wonderful conversation with those waiting for a table. 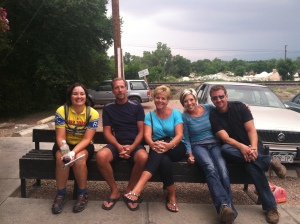 We then took our sushi and rode 2 miles out of town to the Best Western where we ate and relaxed for the night.