We slept in and decided we should take a run to Walmart to make sure we were stocked with food we needed.  We saw some familiar faces, which was odd, because familiar faces was something we weren’t acustomed too.

We then headed on our way. On the way out of town was a cool looking old prison.

We were not sure how far we were going to go, but there were a few places to camp along the way.  We knew from the elevation profile on the maps that from Canon City we’d be doing nothing but climbing until we reached Hoosier pass.  We starting climbing at this point by early afteroon.  Linda saw in her rearview mirror a road cyclist gaining on us.  We moved over to let him pass and realized that he was from the Adventure cycling group.  We asked where they were stopping for the night and he told us it was one of the campgrounds we had considered stopping at, which was only another 6 miles away.  We continued climbing until we got there.

We opted to get one of their last rustic cabins because the weather looked iffy and the price was right. The views were breathtaking.  We went over to the 8 mile Bar and grill and had dinner.  We relaxed, showered, did laundry and called it a night. 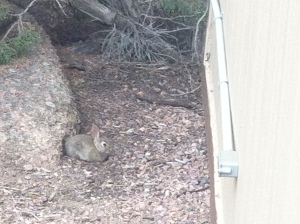 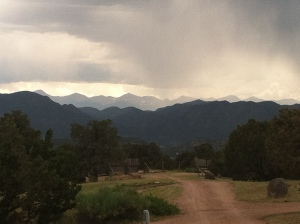 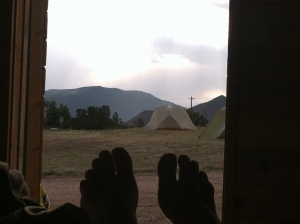